The Municipality of Rotterdam asked us, a team of social designers and architects, to start a design research project with focus on the direct living environment of the elderly in which we actively involve the target group.

We started to investigate which opportunities we can develop for social and physical interventions in a senior citizen complex with the aim of inviting residents to interact with each other and their surroundings.

Den Hoogenban is a residential care location of housing corporation Habion. It is located in the Overschie district in Rotterdam with a combination of residents who fall under psychogeriatric and somatic care. The residents live independently, with care provided by care organization Laurens. 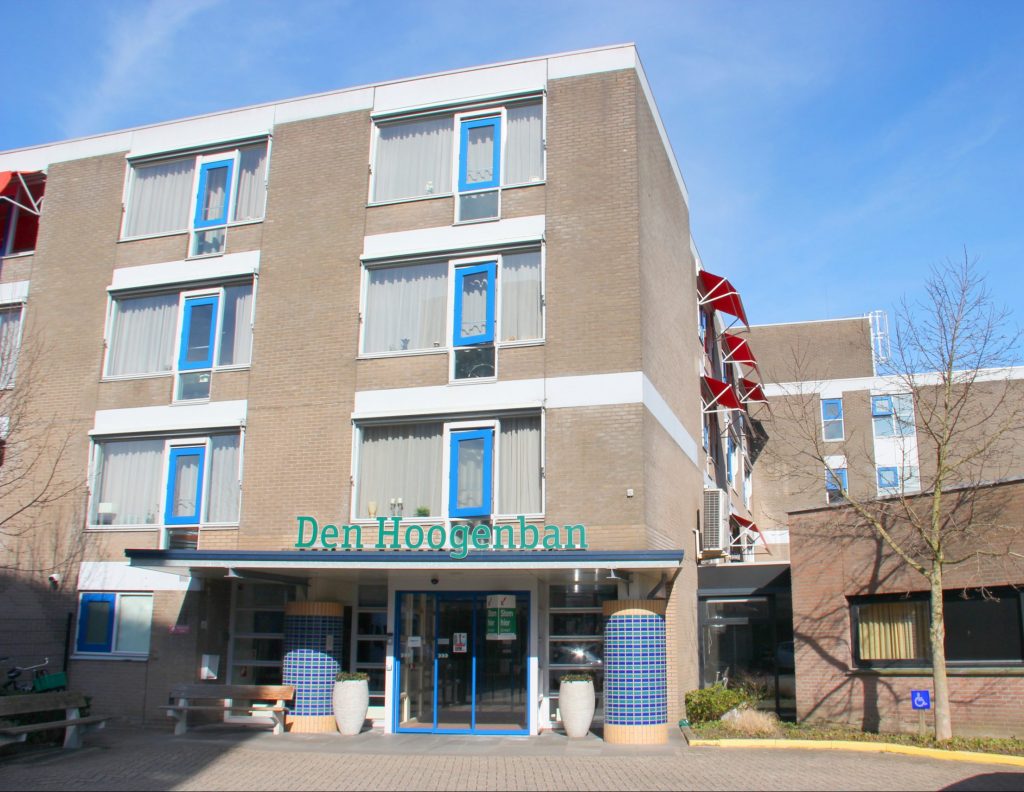 During our Expedition we went through a broad process with field research, framing and reframing, co-creation with the target group and development of prototypes and future scenarios. All proposals are inspired by the input of the residents of the senior citizen complex and their living environment.

Field research
If you really want to create something for seniors, they are the first people you should speak to. We developed various visual research tools which we used during the conversations we had to map out the routines, preferences, and wishes of the residents and others involved.

Co-creation
We translated the collected themes into interactive work forms, which we tested, developed and improved together with the senior citizens and their surroundings in a co-creation session.

Festive gathering
We took the most important ingredients and used them to create physical and social interventions. These were presented to the target group during a festive gathering during which they got the chance to show, through the use of stickers and an accessible feedback-form, which interventions played into their wishes and which didn’t.

The following were the presented outcomes of our research process. 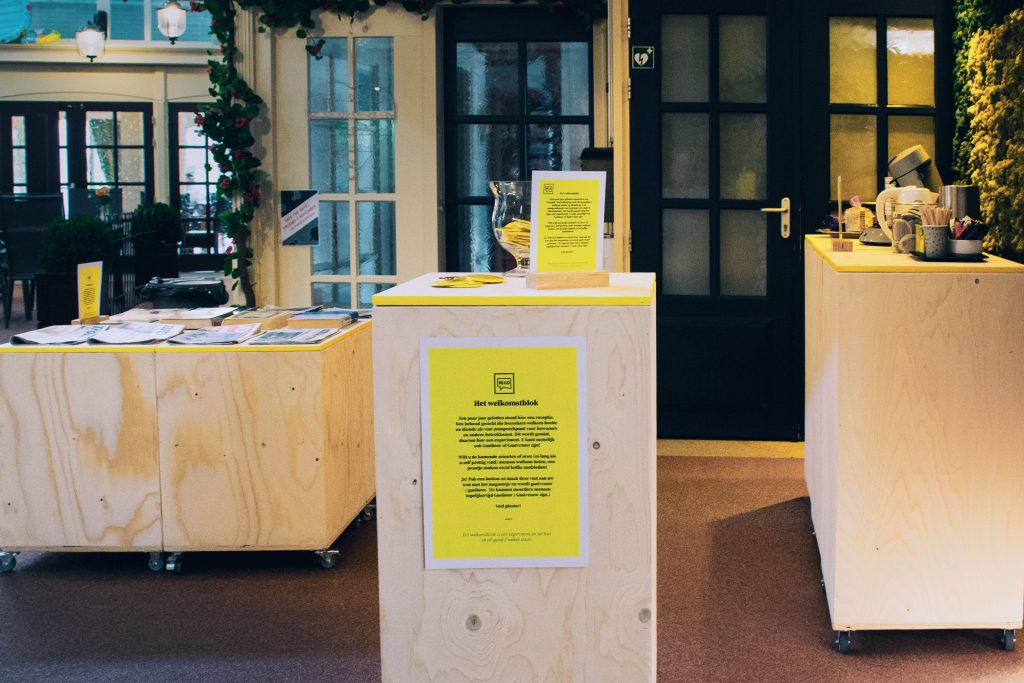 We physically developed a new form of reception area based on a cube concept. These cubes have the following functions: A reading block, information block, welcome block, sitting block and coffee block.

These blocks are mobile, modular and can be set up according to your own wishes and taste. 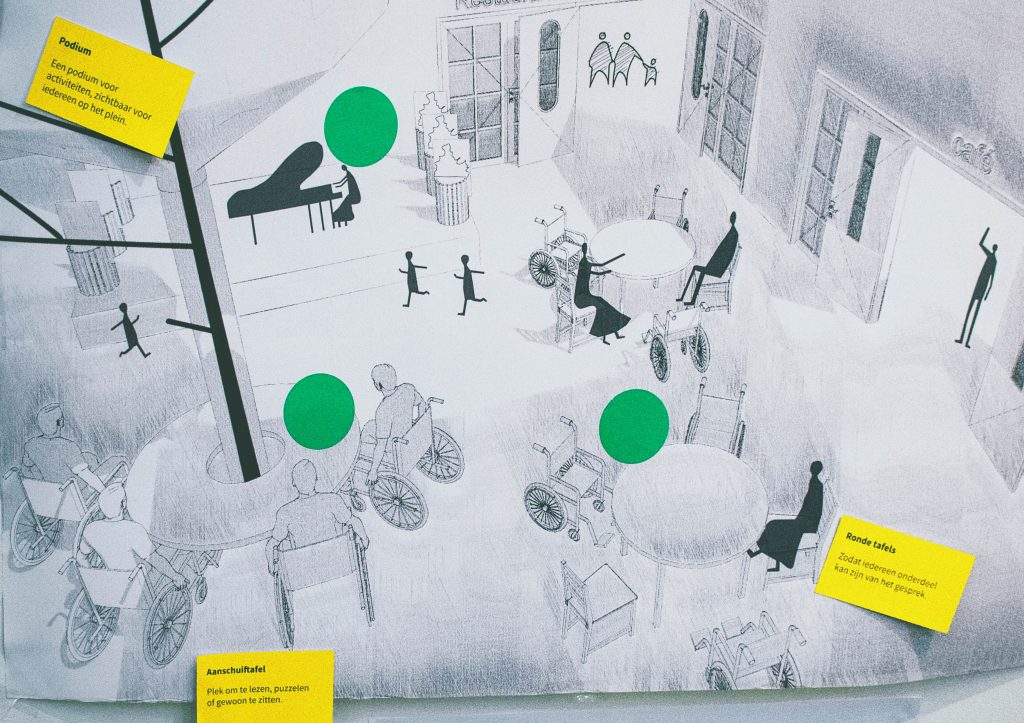 A potential future scenario with different ideas, wishes, and needs. With a number of stated wishes such as a podium, an extension table around the tree, a round table, an activity board, green plants and a reception area.

The former reception of Den Hoogenban provided a familiar face who welcomed visitors and served as a permanent point of contact for residents and other stakeholders. This is missed, that’s why we designed an experiment in which everyone can act as an host.

A large majority of the target group noted that they could see their wishes reflected in the designs. The designs can be adapted based on the changing needs and wishes. The employees and managers of Den Hoogenban have taken ownership, as intended, and are basing the current function of the cube concept upon the use by the residents.

The residents have changing needs and changing physical and mental capabilities. What doesn’t seem to change is the desire to have and maintain influence on the living environment, even in small ways. A lot is determined for you when you get older.

With this project, we used visual tools to, together with senior citizens, map out what was important to them and what they wanted their living environment to look like. Even with the seniors who needed psychogeriatric care, this was often still possible.

The feedback from residents, relatives, local residents and employees was that the residents felt heard through the various sessions and conversations we had with them.

A report and presentation were given to the municipality with a description of our process and our recommendations. You can read this here.

“It’s great to see how much impact you can have with simple interventions. It’s also good to see what the residents respond to.”

“I would like to have a session like this more often. It’s nice to hear what’s going on.”

“I visit my mother every week or two. If it fits at that moment, I would like to welcome people at the new reception for half an hour.”

– Daughter of a resident

My goal is to further develop this research process, in collaboration with various senior citizen complexes, so that it can be used more widely. It also needs to be researched what actions can be taken based on the outcomes. These actions or interventions need to be accessible and manageable in this rapidly changing healthcare landscape.

To achieve this, we are looking for clients and cooperation partners. Would you like to join us on this Expedition? Please get in touch.

This project was made possible by the Municipality of Rotterdam.